Million Seller is an album. 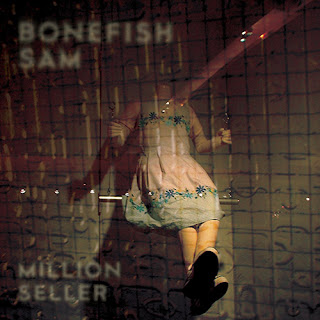 It's done! The new album is finished and it's called Million Seller. I think it's pretty good, definitely the best album I've made in 16 years. You can get your filthy hands on it July 29th.
A lot has changed in the years since Fake Fun, and one of those things is the relevance of physical media for music. I don't think people care about CDs anymore (I sure don't), and I doubt the crossover between Bonefish Sam fans and vinyl fans is enough that I could ever unload a minimum pressing of those scratchy, noisy things.
One thing that hasn't changed since 2000, however, is the obsoleteness of microcassettes. But I'm betting on the MCs in a big way, by releasing Million Seller as a microcassette in its only physical manifestation. Cassettes are coming back, right? Microcassettes can't be far behind.
There will, of course, be digital downloads too, and those will be available at no extra charge to mitigate the buyers remorse of the microcassette purchasers. After this Million Seller comes out you won't be able to find a microcassette player for a reasonable price anyway.
Posted by Bonefish Sam at 11:31 AM 3 comments:

Maybe a new album and who cares?

I think a new album is afoot. Of course that's something I've probably said a hundred times in the last 15 years, but I think I'm really serious this time.

It seems like the only thing stopping me now is a concept for the album artwork and title. Serious or humorous? Plain and artsy or overworked and elaborate? Who knows or cares besides me?

But yeah, I have enough unreleased stuff for ten albums, but the stuff from the last two years or so would make a collection I feel I could be happy with.

What I and we have been up to.

Well, that new computer-based live setup I was talking about a few months ago has actually happened, and it's everything I hoped for. We've played two shows with it so far (Crux and Spacebar) and it performed great. I hesitated to promote either of those shows (sorry if you would have wanted to go) because I didn't know what to expect. Expect more, and better-promoted live shows in the near future. I've been having a good time with this.

I've also been hacking a Teddy Ruxpin for evil. More on this project to follow.

Still doing the Two Ducks and a Pollywog show on KRBX, 89.9 & 93.5, Fridays 8 to 10. A friendly caller to the show recently pointed out that I haven't updated my Internet Presence or Brand in a while, prompting this little tidbit you're reading right now.

And I've made a few new songs, in various states of completeness. I've delicately placed them atop our Soundclouds, unfinished as they are. Because, given my past record of finishing things, it's better that I get them out there now rather than wait until they're really 'finished'.

This site is back.

For about a year now, this site has been under the control of terrorist hackers that hate America, us, and everything else that's good in the world. In the meantime the Web's been made obsolete by Facebook, so nobody noticed. These days, not many people even remember the World Wide Web. Well, now the kids tell me that the Web is sort of retro-cool, so we're back. Let's e-commerce!

Posted by Bonefish Sam at 1:24 PM No comments:

Us On Other Sites

Links To Other Things I And We Are Involved With.